Reflections on Brotherhood and the Kovner Banquet 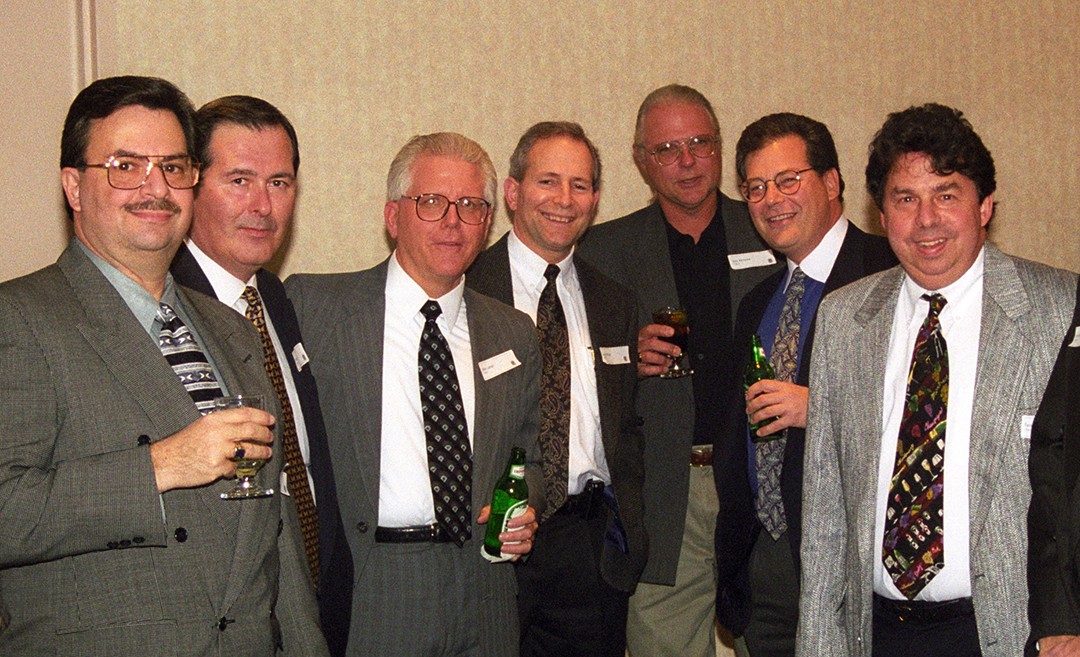 In 1998, the chapter was in the throes of one of its (many) crises over the years, and our alumni once again answered the call to help by attending the Kovner Banquet in record numbers.

Dan Lynch ’69, was one of the many brothers from the late 60s who came to show his support. After the banquet, he wrote this article for the Times Union about what brotherhood and Pi Lam meant to him, and sent a copy to Temple University’s president.

A FRATERNITY OF INCLUSION FACES EXCLUSION
By Dan Lynch

PHILADELPHIA, PA. His name was Alfred Kovner… Koko, his friends called him. I never knew him. He was killed in World War II before I was born. Every year, a group of guys gathers in his name. The dinner is sponsored by the Temple University chapter of my college fraternity, Pi Lambda Phi, of which Kovner was a member.

In the decades since I graduated, I’ve attended this dinner only a half dozen times. It’s held right after the election season, when I’m usually wiped out. This year I received phone calls urging me to show up.

For the first time in better than a decade, 11 of the 50 or so Pi Lam graduates from my era were on hand.

We were a varied bunch… a physician, a dentist, two lawyers, three independent businessmen, the vice president of a huge international entertainment company and the head of an Ivy League graduate school. And, of course, a humble newspaper scribbler or two.

We live in different cities and do different things. What connects us at this stage of life is simply this: We’d known one another intimately before we became what we are now, for better or worse.

We also had this in common: Years ago, we’d been adrift at a huge, impersonal urban university of 30,000 students. We all needed a cordial, human connection to the place. We’d chosen this fraternity from the dozen or so on campus at the time because it had an open charter. It wouldn’t deny anybody membership on the basis of race or creed.

Most fraternities then were exclusionary and openly racist. One of Pi Lambda Phi’s chartered purposes is to combat prejudice, both on campus and in the larger society. In my time there, Pi Lam at Temple was about half Jewish, half almost everything else… from upstate New York Irish to Filipino, to urban Greek, to white-bread Lutheran. No blacks applied for membership during my era. If any had, we would have taken them in, provided they’d been sufficiently demented.

But it was years until my campus chapter became fully racially integrated. In my time on the Temple campus. African-Americans had their own fraternities, and racial tensions were high enough during my student years to provoke race riots across the country. All of us had kept in touch with at least some of the others, so we were able to reconstruct what had gone on in the lives of many who weren’t present. Most were pursuing careers in the professions, education, commerce and the media. Most still were with their first wives, although one guy who showed up Friday night has a new wife only a few years older than my daughter.

Not all of us have prospered. Two are dead. One guy did eight years for drug dealing. Another won’t attend another Kovner dinner until 2018… unless he finds a better lawyer for his appeal than the one he hired when he got busted. At that dinner, we got some bad but, I suppose, predictable news.

The university has banned the Temple Pi Lam chapter for four years… something about too much noise and boozing.

There’s a rational context to that. Every campus now has drinking problems that dwarf what went on in our time, and fraternities are tempting targets. Their parties take place at regular intervals and at the same time and place every week.

This ban could kill the house. In fact, it seems designed to do just that. So, we’ll all write letters to the university administration, begging them not to wipe out our old fraternity chapter. We’ll tell them that this organization, for all its conspicuous warts, was a profoundly positive force in the youthful lives of a few thousand men who treasure that experience in middle age and beyond.

If they don’t, then my old fraternity chapter is dead, a victim of changing times, and nobody at my old university will have the chance to build the vivid, gleeful memories I carry around with me. Come next year, we’ll hold the annual Kovner dinner anyway.

Thank you Brother Lynch for your lifelong devotion, and rest in peace. Chapter Eternal 2017.

“Not four years, but a lifetime.”