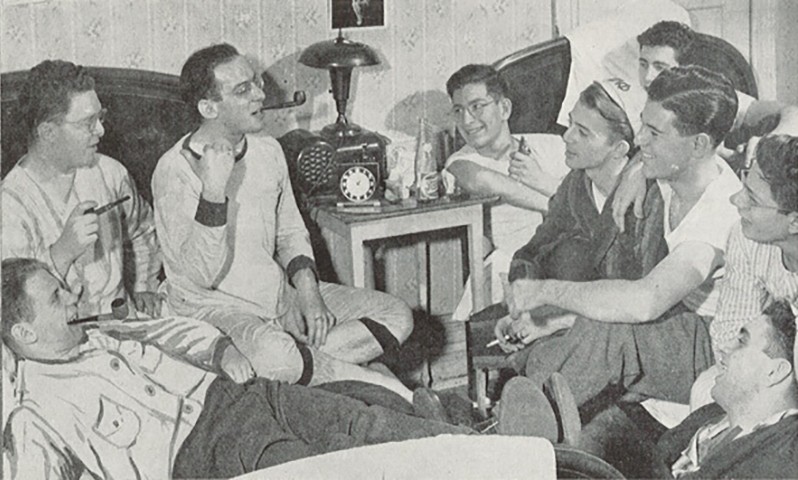 When I was a brother…

Two brothers shared their Pi Lam experiences during the WWII era. These guys walked to Temple uphill in the snow… both ways. Here’s what it was like for them.

“I lived in the House on 16th street across from the cemetery on Park avenue. I joined in September of ’44 in a pledge class numbering four, all of whom survived the initiation. I was scribe for three years and kind of strict with the pledges (short of water boarding and sleep deprivation).”

“The war was still on and the atmosphere was different in ’44 and ‘45. A lot of undergrads joined the services right after Pearl Harbor and of course, many others were drafted. Only kids and 4Fs were left.”

“Although I did not know Kovner personally, I was in the chapter at the formation of the program. Some of the fraters (how’s my Greek?) at that time did know him and worked with Is Wachs, our alumni advisor, and Koko’s dad to set up the tribute. It is amazing and gratifying that event has survived and thrived nearly three quarters of a century. Keep it up!”

“I pledged in 1944 and many of the brothers were in the service or were waiting to be called. The house was on Park Avenue and was the scene of much activity. Many parties, meetings, and tremendous water fights. We had a very nice group of pretty bright guys. We fielded good teams in softball and basketball in the inter-fraternity league. Mitten Hall was the center of Temple activities and gathering place for talking, eating, and meeting girls.”

“I went in the Army and returned late November 1946. I was Rex in 1947. Temple was in a rough neighborhood and there were very few college buildings past a few blocks radius.”

“We played and practiced football in Temple Stadium and played baseball in that area. Every day we had to take a bus and go to practice and return late, eat, and study(?). Our big rivalry with Villanova stopped just before I arrived, but we did have a rivalry with Penn. Penn was the “darling” of the social set and every Saturday became a social event at Franklin Field and they had about 50,000 in attendance each week. I think we all enjoyed Pi Lam and our four years at Temple.”

Brother Feldman passed away in 2017 and was memorialized in this article.