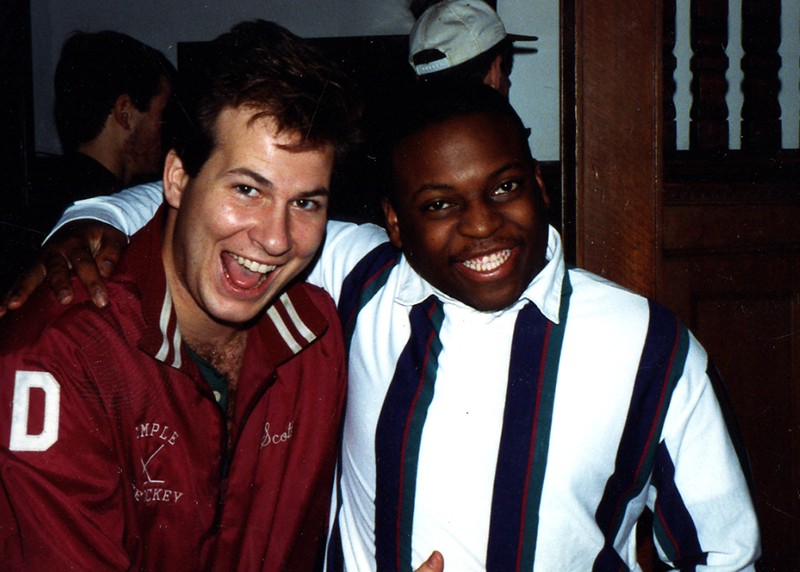 At this year’s Kovner Memorial Banquet, a new award honoring the memory of Shawn Battle ’92, who passed into the Chapter Eternal October 2007, will be given to an undergraduate with a very special set of qualities.

Shawn was a man of good humor who showed remarkable devotion to his friends and his fraternity. His quirky, amiable disposition won over brothers from every circle of the house.

Shawn proudly wore the badge of Pi Lambda Phi and gave freely of his time for just about anything the chapter required. He was a unique and beloved brother whose influence on Alpha Delta touched many lives and spanned more than a decade because he chose to live our motto, “not four years but a lifetime.”

After his passing, a number of brothers shared their thoughts about this extraordinary brother.

“He was an exception to every rule – and I mean that in the best possible way to describe an exceptional person with tremendous faith, and foremost in Shawn’s heart — a fraternity brother. Not just a brother in the colloquial sense or in name of all those who choose and swear a common bond in the name of fraternity, but in practice.

Shawn was an individual who shined like no other. His dedication, warmth and optimism were unmatched and this uniqueness manifested itself in everything that he did in the name of fraternity. Shawn’s first thought was never for himself, but always for others and that frequently meant the brotherhood of the PA Alpha Delta chapter of Pi Lambda Phi. He was tireless in his service to the chapter, both as an undergrad and dedicated alumni who always gave of his time and resources freely. As Shawn joins the Chapter Eternal, let us all keep his ideals and exceptional qualities alive in all of us.”

“Shawn was one-in-a-million. He was one of the truly “great persons” that I have ever met… and I mean ever. Shawn had a huge heart and a great soul. He was always smiling and laughing, making a bad day seem bearable. I’m not sure if anyone made me laugh as much as Shawn did, sometimes at my expense, sometimes at his (think screw gun). It would be impossible to forget all of the great memories that I shared with him.

I couldn’t be more proud to be a Pi Lam, knowing he was, and will always be, my brother. If the Alpha Delta Chapter should ever consider establishing another award, based on honoring a brother who displayed the highest levels of “dedication, warmth and optimism,” Shawn’s name should be at the top of a very short list.”

“Shawn Battle was the consummate fraternity brother. He was a great guy, a tremendous brother, a great motivator, a good listener, and an all around FRIEND. I just hope that once we all get the house back up and running, we all show our respect to Shawn by caring as much about the house after graduation as Shawn did over the years.”

The Shawn J. Battle Purple and Gold Spirit Award will be given to an undergraduate brother who lives and breathes Pi Lam. He volunteers for any task, attends any function, and always represents Pi Lam with pride. If he’s cut, he bleeds purple and gold. He will embrace the meaning of, “not four years, but a lifetime.”

Please join us at this year’s Kovner Banquet to celebrate the memory of our brother, Shawn Battle and share his legacy with a new class of brothers.